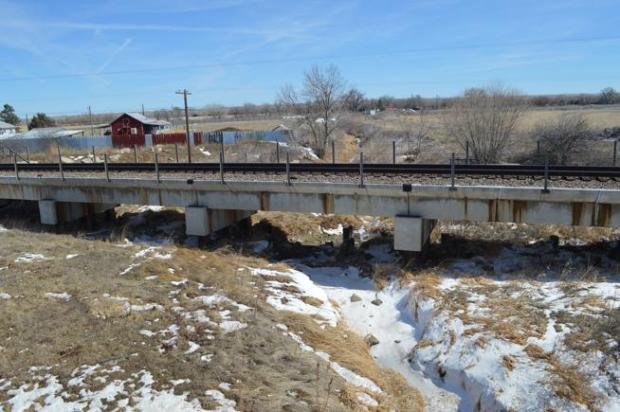 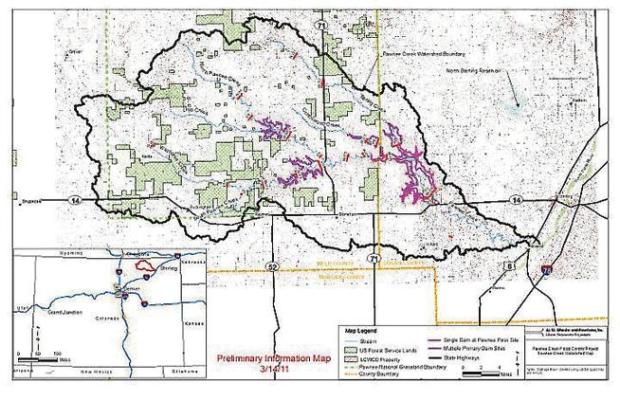 A water conservancy district originally formed to build a dam across Pawnee Creek has shifted its focus to other, more immediate concerns and that has put its new executive director, Shane Miller, in unfamiliar territory.

“I’ve never done anything like this before, but we’re learning as we go,” he said. “We want to be involved in more collaborative efforts with the Colorado Water Conservation Board, the Lower South Platte (Water Conservancy District,) Department of Transportation, Department of Wildlife and so on.”

Miller, who ranches west of Sterling along the banks of the Pawnee, has been involved in the Logan County Water Conservancy District from the beginning, so there’s little he doesn’t know about the district. It was formed in 2000 after flash flooding of Pawnee Creek in the spring of 1997 caused widespread damage in the Sterling area. The district was formed specifically to mitigate flooding in the Pawnee Creek drainage area of Logan and Weld Counties.

The centerpiece of the district’s efforts at that time was a proposed dam 131 feet high and 6,800 feet long across the Pawnee about a mile north of where the creek passes under Colorado Highway 14, 11 miles west of Sterling. In the case of a flood along the order of the 1997 event, which flooded southern parts of Sterling, the dam would hold back about 90,000 acre-feet of water.

But the dam was never meant to create a reservoir. The conservancy district didn’t file for a water right — a necessary step for anyone wanting to store water — because any water the dam held back would have to be released within a few days, allowing it all to flow eventually into the South Platte River.

The dam, it turned out, was beyond the means of the LCWCD to pay for. At nearly $107 million for an earthen dam with a spillway, the price tag was out of reach, and that left the district with the question of what to do with the tax money it had raised.

“We’re getting tax money, so we need to do something with it,” Miller said. “But we need to look at all of Logan County, so when projects do come up, we would be able to participate.”

In October 2018 the district’s three-member board — Brandon Mason, President; Carson Guenzi, Vice President, and Tom Westfall, Secretary/Treasurer — decided to shelve the Pawnee Creek dam for now and widen its scope of interest. Brad McCloud, a public relations specialist with EIS Solutions, said the “major project” of building a flood-mitigation dam across Pawnee creek isn’t completely off the table, but it probably won’t be done in the foreseeable future.

“There have been a lot of changes over the past two years, so (LCWCD) has redefined their mission and taken a new direction,” McCloud said. “We’re in the process of developing a master plan to take (the district) to the next level. There are other, smaller projects that we could do that would mitigate flooding, so that’s where the focus is going to be.”

To formalize that change, the district needs to develop a master plan that explains exactly why it exists and what it plans to do with the tax revenue it raises. To guide that process, the district’s board hired Miller as its executive director and began publicizing its new direction, asking for input about flood mitigation projects that could be done in Logan County. That process included presentations before the Logan County Board of Commissioners and the Sterling City Council.

As it happened, the Morgan County Commissioners already had approached the Colorado Water Conservation Board and the Colorado Department of Local Affairs to fund what came to be called the Lower South Platte Master Plan, a study of how to mitigate flooding along the South Platte River between the Weld-Morgan county line and the Nebraska border. Commissioners in Logan, Washington and Sedgwick counties also signed on to host meetings and workshops during the study, and that master plan was completed about the same time the LCWCD decided to change its focus.

When that master plan was finished and formally presented to city and county officials earlier this year, the LCWCD hosted the event at the Colorado State University Engagement Center in Sterling.

Much of the LSP master plan is outside of the LCWCD’s scope. Of the top three reaches of the river most needing attention only one, the Sterling reach, was in Logan County. The other two high-risk areas are the Rainbow Bridge area at Fort Morgan and the Hillrose area.

Eli Gruber, an engineer with CDM Smith who presented an overview of the plan to city and county officials, said the Sterling reach presents the greatest challenge because of a combination of high population density in the flood plain and infrastructure that restricts river flow. The three-bridge combination over the South Platte, a railroad bridge less than a mile downstream, and an irrigation diversion structure all impede the flow of water and sediment in time of flood.

Gruber said the study managers looked at a levee system to protect Sterling but levees high enough to protect the city from a 100-year flood would stress the main bridge beyond its capacity.

Rather, the study recommends using the entire width of the river’s historic course to carry the water past Sterling, including a secondary, “high-flow” channel designed to relieve stress on the main bridge. Gruber said a lower berm between the river and Sterling would be useful to prevent flooding from a once-in-25-years flood.

Because of the nature of the South Platte, Gruber said, many of the recommendations have less to do with preventing flooding than with mitigating the damage of a flood and then quickly recovering from it.

That’s the kind of flood mitigation Miller and his board may be able to include in their master plan, too.

“We’re reaching out to stakeholders … asking for input on the master plan,” Miller said. “We’ll be looking for things that people may be aware of that may or may not be appropriate to include in the plan.”

The outreach has been going on for some time and will wrap up at the end of April. While there has been some response, Miller said, it’s been less than he’d hoped.

Some projects have been suggested, however, and Miller is encouraged that some of them are ones LCWCD already had in mind. The suggestions range from something as simple as clearing some trees in the Atwood area to the million-dollar remediation of Pawnee Creek under U.S. Highway 6 and the BNSF railroad tracks south of Sterling. Others include such things as a flood plain elevation study of the southern parts of Sterling and work on Sand Creek west of Sterling.

Meanwhile, Miller is continuing his drive to gather input.

The district will gather all of its input and turn it over May 1 to legal and engineering consultants and should have a master plan submitted to the 13th Judicial District Court by October.